Audubon’s coastal team, volunteers, and partners ventured out during breaks in drenching rain and thunderstorms trailing after Tropical Storm Colin to survey surviving bird nests and chicks and to reestablish symbolic fencing around nesting sites across the state. Small craft advisories remain in effect in Collier County as of press time, due to a continued stream of tropical thunderstorms, so staff has been unable to access nesting sites at Second Chance Critical Wildlife Area and other offshore islands. Our Tampa Bay staff are on the water today assessing survival in wading bird rookeries and shorebird colonies.

Remarkably, the number of surviving nests and chicks is much higher than we initially feared. Here’s a sampling of survival stories from Northeast Florida’s Atlantic Coast and the Gulf Coast.

Although the Atlantic Coast was spared the force of initial storm landfall, high tides and storm surge took a toll. In St. Johns County, Audubon’s Chris Farrell reports that the Summer Haven Least Tern colony fared well, with none of the 100+ nests lost due to Colin’s passage.

On the other hand, Julia’s Island lost 55 Least Tern nests to overwash from a high spring tide just prior to Colin’s passage and then lost the remaining 18 nests as Colin’s surge overwashed higher elevations.

Heavy rainfall and thunderstorms assaulted the Panhandle coast before and after Colin made landfall in the Big Bend area. Audubon’s coastal team has reached many of the active nesting sites in Franklin County to tally storm survivors and losses.

As far as the old St. George Island Causeway, now an offshore island, Audubon’s Bonnie Samuelsen reported that “it looks like snowfall out there with all the terns and gulls still actively nesting” two days after Colin’s stormy weather had passed. On the southwest shore of St. Vincent Island, a pair of adult American Oystercatcher adults with a chick in tow were sighted after Colin passed, where no known nest occurred. However, on Flagg Island, located two-thirds of a mile offshore to the southwest, an oystercatcher pair with a chick was counted prior to storm passage – could it be that this unfledged floated and swam that two-thirds of a mile, helped along by Colin’s strong southwest winds?

Along the 7+ miles of Tyndall Air Force Base in Bay County coastal beach Snowy Plovers nesting on higher elevation upper beaches remained above the highest reach of storm overwash although in some areas new sand deposits were more than three feet deep. On the west end of Shell Island, a Wilson’s Plover pair is still incubating one remaining egg of the three original eggs in the nest. A small Least Tern colony was overwashed and the birds have abandoned the area. On Crooked Island West, one of three Least Tern nests remains intact.

The Tampa Bay region experienced heavy rainfall and storm surge-driven beach overwash as Colin passed by and crossed the state. Many offshore islands were inaccessible until Thursday or Friday due to continued rough seas and thunderstorms. At the Richard T. Paul Alafia Bank Bird Sanctuary in east Tampa Bay, bird nesting habitat leased from and managed in collaboration with The Mosaic Company, most of the nesting waterbirds survived Tropical Storm Colin relatively well.

This week, Audubon Sanctuary Manager Mark Rachal found that over 300 pairs of Brown Pelicans were still feeding their large young in nests in the trees, and counted over 200 young-of-the-year Roseate Spoonbills that were waiting on the shorelines of the sanctuary islands for their parents to bring food.  Thousands of White Ibis young survived the storm and many are flying but remain at the colony during the last part of their "adolescent" growth period.  Great Blue Heron adults were attending young in nests, too.  The tidal surge was not high enough to disturb the "no trespassing" signs, although some storm-caused erosion did occur.

In Pinellas County, volunteers and partners dashed out onto beaches during rain breaks to check on the Black Skimmer colonies at Sand Key, Indian Shores, and St. Pete Beach as well as the oystercatchers and Wilson’s Plovers nesting on Fort Desoto park’s north beach. At Indian Shores, Audubon’s anchor steward, Dylan Kahn, reported that half of the roughly 100 skimmer nests survived with adults continuing to incubate eggs in the highest elevation areas of the colony. Paul Ingham, steward caretaker of the Sand Key skimmer colony reported that about 75 of the almost 200 pre-storm nests survived the floodwaters. Dr. Beth Forys, Eckerd College, reported that none of the estimated 80 nests pre-storm survived extensive flooding on St. Pete Beach. In all of these skimmer colonies, mating and scraping have resumed and re-nesting is expected.

Fort Desoto’s sole oystercatcher chick was led by its parents through floodwaters to picnic pavilion #6 where they successfully weathered the storm and returned to their protected beach area the following day. Although two active Wilson’s Plover nests were overwashed, three Wilson’s chicks survived as well as two Willet chicks.

Dan Larremore, Florida Park Service Biologist, caught a rainfall break and boated to Three Rooker Island to assess losses and repair symbolic fencing. He reported that “…the Royal, Sandwich, and Caspian terns, Black Skimmers, and Laughing Gulls are still in business…” and that he saw many tern and gull chicks on the shoreline.

Heavy rainfall and storm surge flooded the Black Skimmer colony on Lido Key, swamping all unhatched eggs and tiny chicks but 28 of the pre-storm 34 chicks survived. Adult pairs were in the colony as soon as beach flooding subsided, digging new scrapes in which to lay more eggs and begin anew.

You can see a short video of a mother Siesta Key Snowy Plover protecting her three tiny chicks in the storm winds, chicks that hatched on the day that Colin made landfall. The video was shot by intrepid bird steward and photographer Claire Herzog. Two of these three one-day-old chicks survived the storm along with two 3-week old chicks from two other broods.

Mixed survival of Black Skimmers, Least Terns, and Wilson’s Plovers was reported by Audubon’s Adam DiNuovo in the Big Marco Pass Critical Wildlife Area in Collier County. He estimated that 180 of about 300 pre-storm Least Tern nests survived Colin’s floodwaters and many of the chicks took refuge in the vegetation on the upper beach to survive the storm. About 15% of the mid-island mixed colony of 120 Least Tern nests and 200 Black Skimmer nests remains. The southernmost colony with about 75 Black Skimmer nests was overwashed with all nests lost. Adam and Rookery Bay NERR staff have been unable to reach offshore islands, including Second Chance Critical Wildlife Area due to continued heavy rain and thunderstorms across Lee and Collier County. 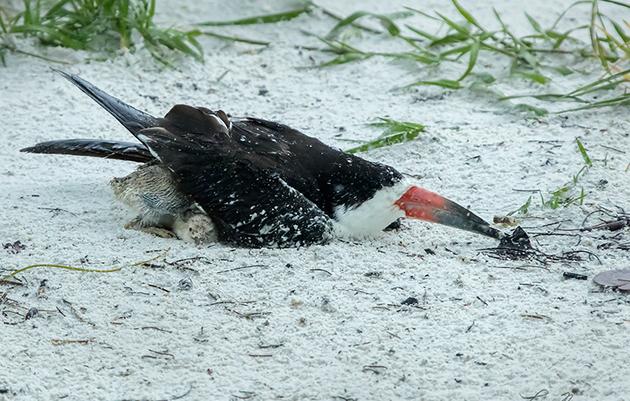 Along a Battered Coastline, A Remarkable Story of Survival

As expected, Tropical Storm Colin resulted in some terrible news for Florida's coastal nesting species. But there were some glimmers of hope. 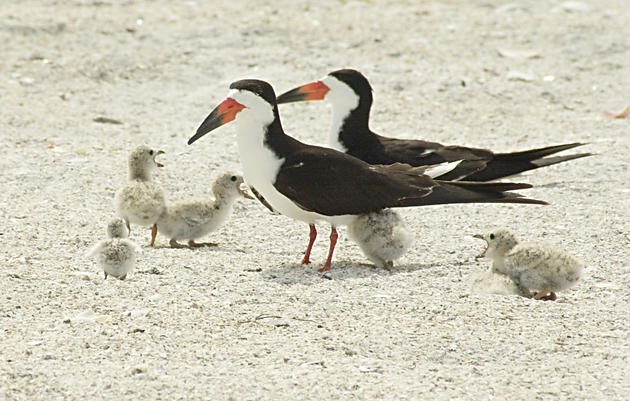 Florida's beaches and shores are vital to many different bird species throughout the year. And they need your help. 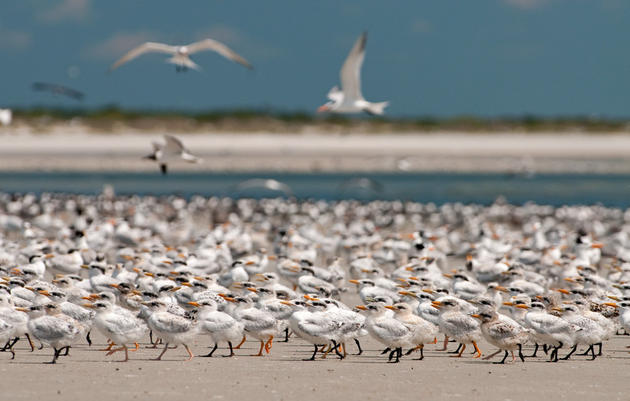 Beach-nesting birds on Florida’s Gulf Coast took a beating this week with the relentless rain and storm surge brought on by Tropical Storm Debby.