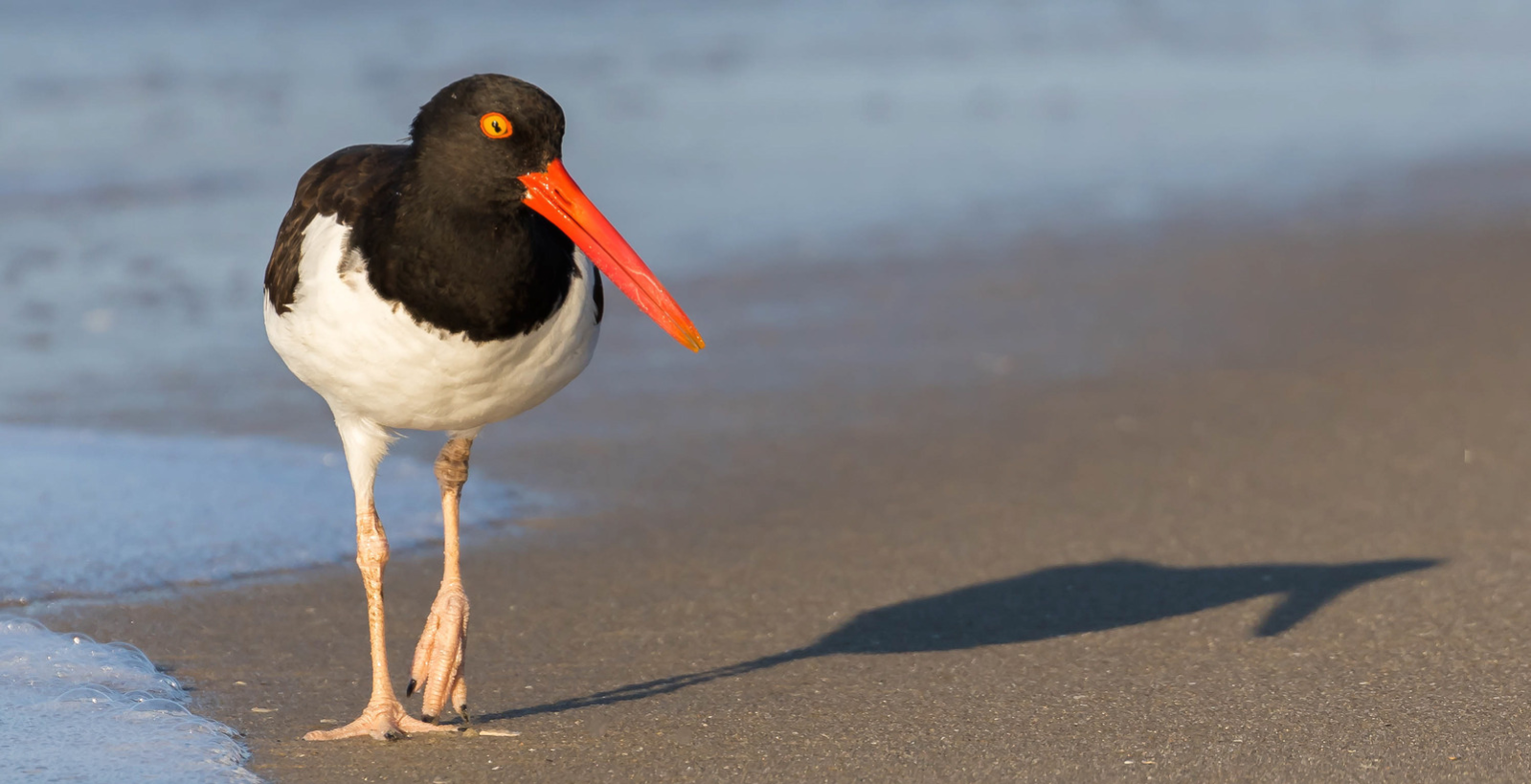 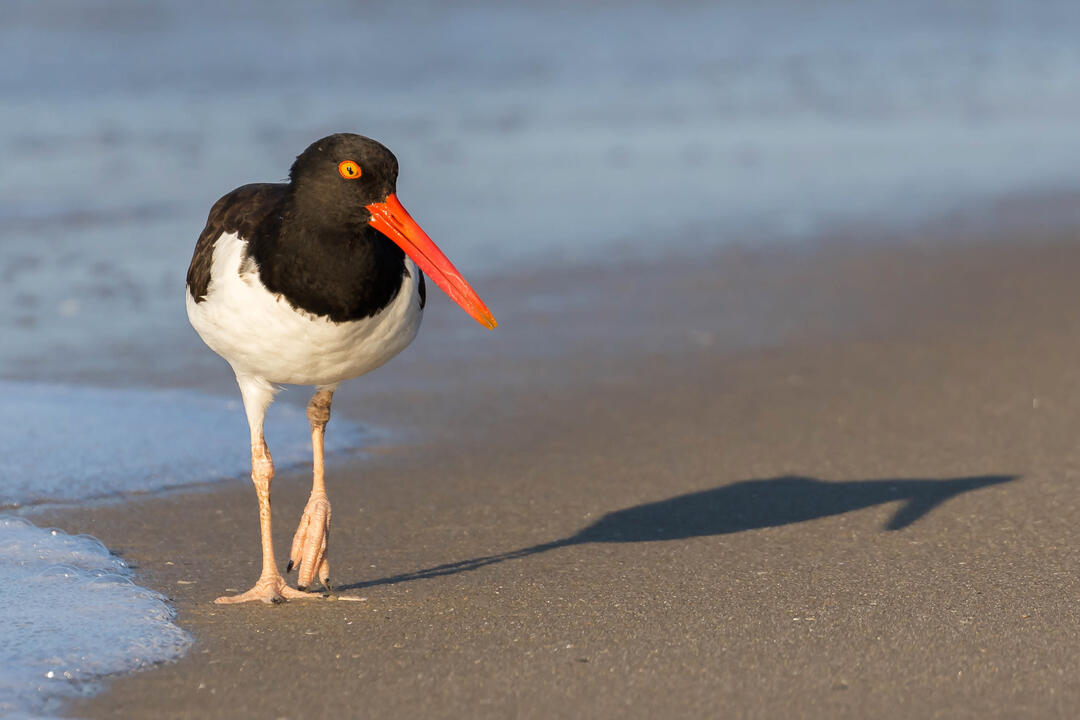 The focus of Audubon Florida’s Coastal Team shifts between the breeding and the nonbreeding season, but there are always birds on Florida’s beaches in need of protection. Throughout the nonbreeding winter, the team records data on any banded birds they see and prepares for the upcoming breeding season. Already this year they have learned valuable information about the movements of one of Florida’s largest and most eye-catching shorebirds: the American Oystercatcher.

Listed as a state-Threatened species, the American Oystercatcher has a bright red-orange beak that’s in striking contrast to its dark feathers. As its name suggests, oysters and other bivalves make up its diet, and its long beak is used to either pry open the shells or stab at them until they break. Ideally, American Oystercatchers build their nests among dunes on the beach or on marsh islands, but as Florida’s beaches become increasingly more populated and developed, oystercatchers and other shorebirds often make their nests on gravel and tar rooftops. Nesting season runs generally from March 1 through August 31, but work monitoring this unique species does not end with summer.

Kara Cook, Audubon’s Rooftop Biologist in the Tampa Bay region, monitors 90 rooftops in a five-county area for nesting activity. She spends the nonbreeding season installing shelters and chick protections on the rooftops to keep next year’s hatchlings safe. She also counts shorebirds and seabirds to learn how they are using coastal habitat in the region: Red Knots, Black Skimmers, several species of plover, and American Oystercatchers, to name a few.

She and her colleagues on the Coastal Team have witnessed some interesting territorial behavior between two pairs of American Oystercatchers at Indian Shores Beach.

Oystercatchers are typically monogamous birds, nesting with one partner season after season. The team has been monitoring a particular bird, identified by its band number, W73, since early 2021. W73 and its partner, W74, fledged one chick on a rooftop in 2021. Since that breeding season, W73 has been spotted, but W74 is nowhere to be found.

“We have no idea what happened, but there’s been some pretty bad red tide this year, or it could have been a natural death due to age,” says Kara.

Kara and Tampa Bay Area Shorebird Program Manager Holley Short have seen W73 with a new partner, and while the pair made two nest attempts, they did not successfully fledge chicks in the summer of 2022.

After an unsuccessful nesting season, W73 and its new unbanded partner have been observed at Indian Shores Beach for the winter – less than a mile from their rooftop nesting site. They spend their days foraging: winter storms bring lots of food to the shore, and though this pair does not migrate, they still need energy to survive the winter.

While conducting nonbreeding season surveys, Kara and Holley have seen W73 and its partner exhibiting territorial behavior on the beach, behavior that is usually reserved for defending their nesting territory.

“W73 and its unbanded mate have been getting into tiffs with an unbanded pair in the same area,” explains Holley. “It’s almost like a territory dispute between north and south - one pair never goes farther south down the beach, and the other pair never go farther north.” When the pairs meet, they yell at each other, put on aggressive displays, and seemingly fight over the foraging territory.

According to Holley, it’s common for territorial disputes to occur over nesting areas during the breeding season, but it’s unusual to see fights like this over foraging territory.

Without W73’s band, the Coastal Team would have no way of tracking this particular bird’s habits, but banding gives biologists insight into where birds go throughout their annual cycle and serve as a reminder of their needs change throughout the annual cycle.

“We focus so much on the breeding habitat on the rooftops,” she says. “But seeing a banded American Oystercatcher that was previously on a roof and is now resting and foraging on the beach - it’s a reminder of the importance of their non-breeding season needs on the beach.”

Banded bird observations are critically important to our understanding of how birds use habitat, how they move across the landscape, and how long they live, among many other factors that help us protect birds and the habitats they need. Bird watchers can contribute to these efforts by reporting observations of banded birds. Thanks to reports by bird watchers, we can learn more about the movements, populations, and breeding success of birds throughout the annual cycle.

If you see a banded bird:

For information on how to report banded birds of all different species visit: FL.Audubon.org/banded-birds