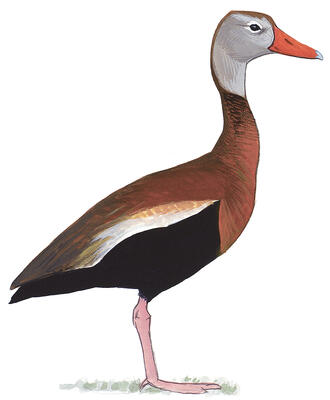 Black-bellied Whistling Ducks are beautiful, charismatic birds that make a distinctive whistling sound. They first arrived in the United States in the mid-20th century, and until recently had only been found in the Southeastern United States, Arizona, Mexico, the Bahamas, as well as Central and South America. Researchers confirmed the ducks bred in Florida in 1990, and now they are expanding their range into states as far north as Wisconsin, and also to larger expanses in Florida.

For more than 20 years, the Corkscrew Swamp Sanctuary’s Boardwalk Naturalists have made daily observations of birds and other wildlife seen from the boardwalk. Recently, the Sanctuary’s research team has worked to compile these data. While daily observations began in 1999, the first Black-bellied Whistling Duck data from the boardwalk came from two sightings in September of 2007. The Naturalists noted a few more whistling ducks in 2008, and then more and more with each passing year. According to recent data, Blackbellied Whistling Ducks are seen at the Sanctuary nearly half the days of the year, and nearly every day from June through September.

“We are theorizing that, in general, whistling ducks are changing their movement patterns. Warmer temperatures may mean they are finding suitable conditions farther north. In addition, they are taking advantage of agricultural areas to find food. As their populations expand, we are seeing more and more of them here," explains Shawn Clem, Ph.D., Director of Research at Corkscrew Swamp Sanctuary.

At the same time, Corkscrew Swamp Sanctuary’s land management team is well on their way to restoring 1,000 acres by removing Carolina willow and other shrubs that crowd the marshes and reduce waterbird habitat, allowing the patchwork of diverse native wetland plants to return. Black-bellied Whistling Ducks at the Sanctuary have recently begun to take advantage of these restored wetlands to rest and find food.

As climate change continues to impact Florida, long-term data are critical to tracking trends and understanding relationships among species, as well as how they migrate.