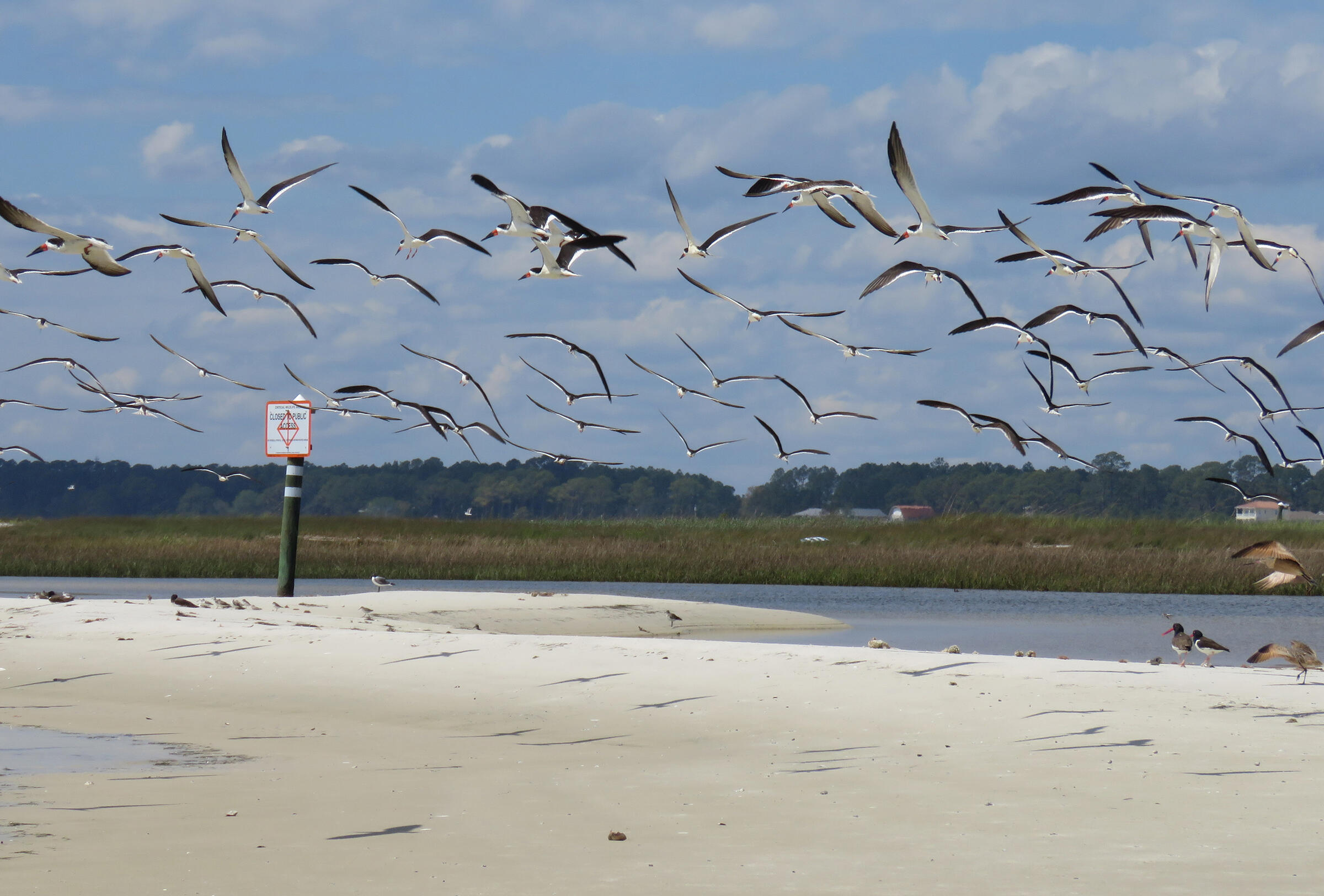 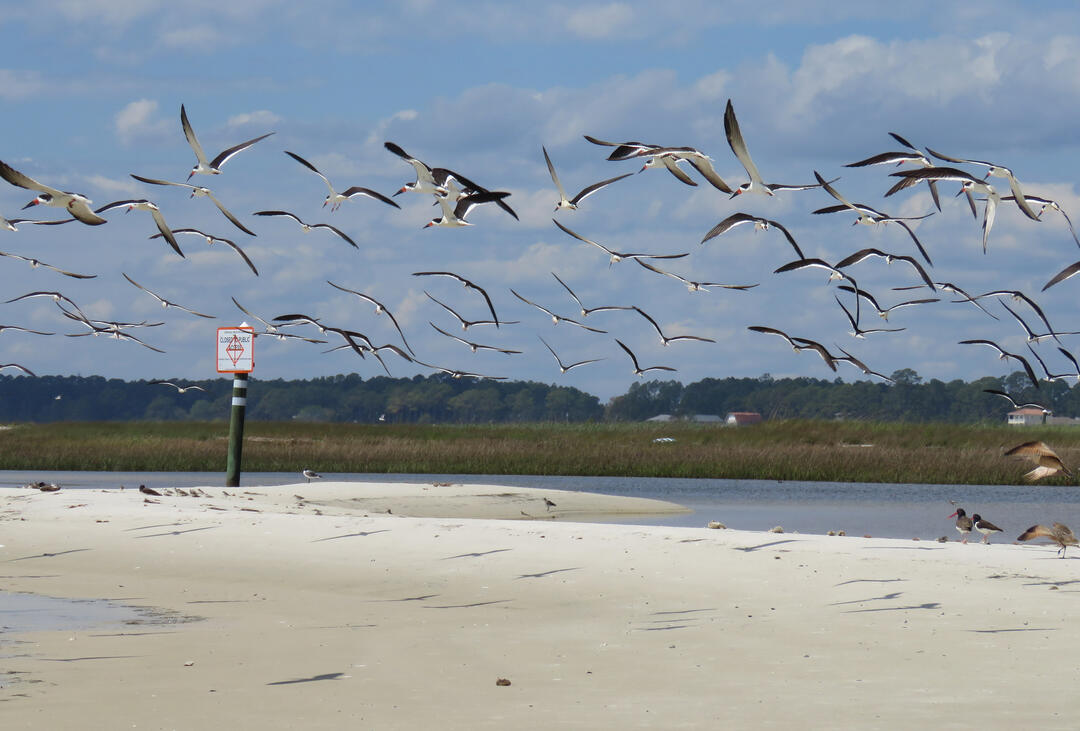 Collette Lauzau, Audubon Florida Shorebird Biologist, checks over her bright orange and yellow kayak one more time before slipping into the seat and nosing out of the Lanark Village Harbor. Smack in the middle of the Forgotten Coast, she sets her sights on a barrier island about a half-mile from shore and one of the most important bird breeding sites in the region: Lanark Reef Critical Wildlife Area.

Calmer waters prevail in the summer months, and the flats sit beneath a layer of shallow water. Lauzau spies young stingrays and small sharks as she paddles, keeping her eyes out for green sea turtles amidst the waving seagrasses. Once a week, she makes the 20-minute journey to the island, spending half a day counting sea and shorebirds.

“The most abundant bird nesting here is the Laughing Gull, but there are also hundreds of nesting Brown Pelicans,” Lauzau explains, “American Oystercatchers and Willets use the area, as do wading birds like Great Egrets and Tricolored Herons. My personal favorites are the Black Skimmers and the Gull-billed Terns. The Gull-billed Terns have so much attitude - they always make me laugh!”

Almost ten years before, panicked locals watched the same horizon line, shielding their eyes from the April sunshine and imagining the raft of oil from the Deepwater Horizon disaster headed their way. With so much gushing from the underground leak, the brown slick had already covered the Louisiana coastline, and was now making slow but steady progress towards Florida.

How, and when, it would arrive remained anyone’s guess.

As crews worked frantically to plug the spill and contain the spewing oil, specialized ships skimmed as much as possible from the surface. This oil remained usable, a commodity that BP sold back to the market. The company devoted all the proceeds from these recovered oil sales to the National Fish and Wildlife Foundation as the Recovered Oil Fund for Wildlife, jumpstarting the wildlife recovery work that has continued for a decade.

In early 2011, Audubon received a call from the fund’s administrators. Birds had already been devastated by the oil spill. While some lucky birds recovered from oil-drenched feathers, others faced disturbance on the nesting beaches that remained, and scores of additional birds struggled to find sustenance in the wake of the disaster that effectively sealed their food supply in gunk. The grants from the Recovered Oil Fund for Wildlife were available now to start mitigating the blows to wildlife. Audubon Florida’s Executive Director Julie Wraithmell, then the Director of Wildlife Conservation, had just the project.

Lanark Reef stretches for six miles along the Gulf coast, partially submerged and partially made up of barrier islands and sand bars. Because the State of Florida conveyed the islands into private ownership in the 1950s, the precious 3-acre upland beach nesting habitat remained vulnerable to development. In fact, one such owner was determined to develop the last parcel on the island into condos — all but guaranteeing elimination of sea and shorebirds nesting there.

With a grant from the Recovered Oil Fund for Wildlife, Audubon stepped in, purchasing the three acres of upland for $50,000 in 2012 and assigning staff and volunteers to monitor the species that used the island. Together with the adjacent Dog Island, Audubon gained a Globally Important Bird Area (IBA) designation.

The Lanark Reef-Dog Island IBA is now one of the most important wintering shorebird areas in Florida, especially for Piping Plovers, American Oystercatchers, and mixed flocks of migratory shorebirds. Lanark Reef was ranked as the biologically most important site in Florida for winter shorebirds. Lanark Reef also supports breeding Brown Pelicans, wading birds, American Oystercatchers, and seabirds. In the early 1990s, a banding station at Jeff Lewis Wilderness Preserve on Dog Island recorded large numbers of neotropical migrants, including over 6,000 Gray Catbirds in a single day. The bird list for Dog Island is 274 native and three exotic species.

Additionally, Audubon partnered with the Florida Fish and Wildlife Conservation Commission (FWC) to designate Lanark Reef as a Critical Wildlife Area, preventing landings by all boats except those expressly permitted by the FWC. Though the birds of Lanark Reef could still face impacts from the oil spill if they traveled throughout the wider Gulf of Mexico, at least these nesting grounds would remain protected.

When Lauzau and her team visit the island to continue monitoring the sea and shorebird nesting efforts, they add their data to counts across the state of Florida and across the Gulf of Mexico. Working together, Audubon staff and state and federal researchers can monitor shifting population centers while protecting the areas these birds need to breed.