Birds are the measure and treasure of the Florida Everglades. Your support can help many of the avian treasures that depend on the great array of habitat we call the Everglades. 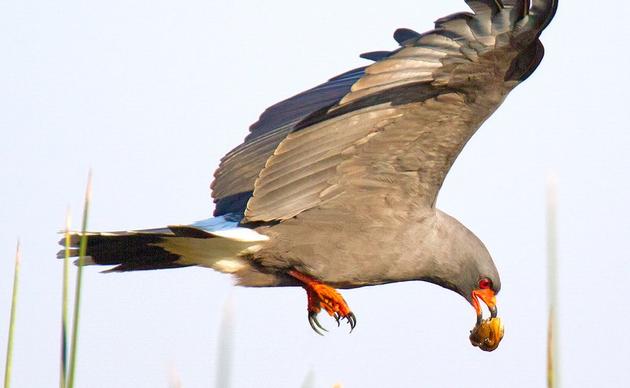 Over the past two decades, the Florida Grasshopper Sparrow (Ammodramus savannarum floridanus) population has plummeted from more than 1,000 birds in the wild to less than 100, making it the most endangered bird in the continental U.S. They now are restricted to a few conservation areas and private ranches near the Kissimmee River. State, federal agencies, and NGO partners like Audubon have responded by improving management activities, increasing research devoted to the sparrows, and starting a captive breeding program.

And we have great news! The captive program has been successful, and for the first time ever since its inception in 2013, 100 captive Sparrows were released to Florida Fish and Wildlife Conservation Commission’s (FWC) Three Lakes Wildlife Management Area last summer. In addition, more than 50 sparrows have been released this spring.

Because they were reared in captivity, researchers harbored concerns that the sparrows could survive in the wild. Survival of released birds is unknowable until the males start singing during the spring breeding season. To our unspeakable joy, at least 15 males released last summer have since been spotted singing, in addition to six released this spring. Some appear paired and preparing to nest.

Much remains to be done. The released birds must breed successfully and start rebuilding populations. The White Oak Conservation Center is doing most of the captive breeding and more sites are being reviewed to increase capacity. Releases have been focused at Three Lakes because the area has the largest remaining population, but other sites can support releases to spread the populations out.

Audubon staff has been critical team members throughout the reintroduction process, providing technical support to the agencies, funding field technicians, and securing funds to maintain captive breeding activities. The recently released singing males give us hope that we can recover this wonderful endemic Florida bird and pave the way for further support of this critical program.