Whether you participated in our 24-hour Birdathon or simply want to support those who did, your donation supports Audubon Florida's essential mission to protect birds and the places they need. 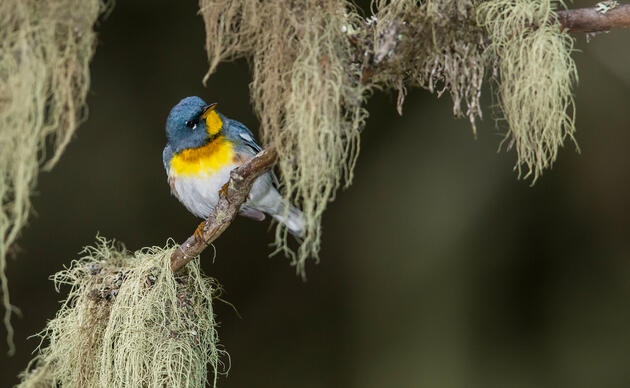 Florida is renowned for its birdlife and despite COVID-19, Audubon Florida hosted the Birdathon on Earth Day, April 22, 2020.  In difficult times, we happily birded together while physically apart, bringing people outside into their backyards with a fun purpose. Our yards provide a window into the avian world, a world that needs our help now and into the future as climate change and development continue to threaten the places birds need to survive and thrive.

Because it was a weekday, Audubon staff were asked to do what they could while working from home under the “stay-at-home” order. Here are a few glimpses into their experiences.

I am fortunate enough to have a space in a neighborhood on south Key Largo that still harbors some mature tropical hammock. Since much of the Florida Keys is developed, both seasonal migrants and summer resident species make good use of it. Florida Bay is just a stone’s throw away, so water birds are regular sightings from my yard, too. All I had to do was keep my windows open and my ears alert as I entered data onto my laptop that day.

I always appreciate every bird I come across, but on that day in April, I was especially interested in the Gray Kingbirds and Black-whiskered Vireos. These two species are rarely seen outside of South Florida, and to see them return to these woods to possibly breed is a unique experience at this place that I currently call home. The 29 species tallied in all that day were a refreshing lesson in humility through appreciation of my surroundings during the stress of the pandemic.

I live on a wooded two-acre lot east of Naples and was pretty excited about the opportunity to move my computer outside for the day so I could keep an eye (and ear) peeled. For me, recording bird sightings from my lanai is almost a daily occurrence. Just ten days earlier, I had observed an Indigo Bunting and a Black-throated Blue Warbler at my pond, so I had hope that a few straggling migrants would still be around for Birdathon. On this day though, the pickings were slim.

I quickly got my usual Carolina Wren, Blue Jay, Red-bellied Woodpecker, and several other “regulars” from my desk before deciding to walk up the driveway to the street. There I hoped I would see an American Kestrel on the power line, but no success. A little later, in the back of the property, I hoped to catch another glimpse of the Louisiana Waterthrush that had been poking in a puddle several days earlier, but no dice. My usual Ruby-throated Hummingbird was even playing hard to get. Gazing up at the sky, the swirling Black and Turkey Vultures were interspersed with graceful Swallow-Tailed Kites, which are always a pleasure to witness, but they are not hard to find at this time of year as they breed in the tall pines nearby. Later in the day, I noticed a different call than I usually hear, and was surprised to spot an American Crow, a first for my yard.

While northbound migrants were nowhere to be seen, I was happy enough with the 15 species that I know are finding the right habitat they need year-round to breed right in my yard and neighborhood.

I had set the alarm for 5:30 giving me a half-hour to stretch and get coffee before the just-outside-my-window Northern Cardinal blasted his daily 6:00 a.m. wake-up call. The air was a cool 58 degrees F and skies clear as I stepped outside. I live on one acre with five empty wooded lots across the street.  Walking along the street side of the property, I could see a good distance beyond my immediate yard.  As the light grew so did my list.  In the distance, the unmistakable call “BOB WHITE, BOB WHITE,” loud and clear!  Barn Swallow zipped overhead catching my eye.

There began a flurry of texts from fellow Birdathoners; comparing notes about each new species. “How many do you have so far?” As the day went on it became increasingly difficult to add new species.

The sun was hitting the top branches of a very tall East Palatka Holly that was covered with tiny flowers.  It was alive with activity; bugs, bees, butterflies, all too far away to photograph though I was able to identify several.  And then, I saw it - a Cape May Warbler was the grand finale of the day!  It flitted around as warblers do for at least 15 minutes and as hard as I tried was only able to get few photos that would confirm the identity. But I was able to get some soul-satisfying looks before it finally took off, perhaps migrating north. My final tally for the day was 30.   I got my special warbler.  Happy and satisfied I headed indoors to sit down and relax, ready for a glass of wine and dinner.

With 31 staff participating across the state, our collective total was 121 species! We are all looking forward to doing it all over again in 2021, safely away from home. With your support, we will continue to advocate for birds and the places they need in the Florida legislature, along our coasts, in the Everglades and Lake Okeechobee, and across the state.

Find information about the 2021 Birdathon.