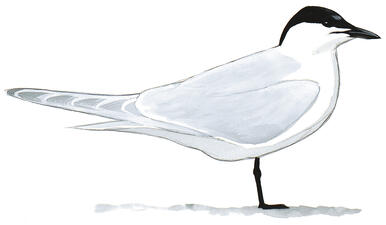 The low-lying islands appeared as if from nowhere this spring in Northeast Florida’s Nassau Sound. As a natural result of shifting sediments in the bay, the shoals had gathered enough sand to break the water line, presenting a unique opportunity for nesting birds in the area.

Long-time volunteers Pat and Doris Leary wondered if the new islands — far away from the busy beaches — would remain above tide and if local shorebirds would take a chance on this tenuous but attractive habitat. And, if the birds did nest there, could they be protected from disturbance in this recreationist’s paradise? Luckily, foresight meant that the law was on their side: When the Florida Fish and Wildlife Conservation Commission (FWC) redesignated the Nassau Sounds Critical Wildlife Area (CWA) in 2016, they drew boundaries large enough to include emergent islands just like these ones. The new breeding spots automatically gained CWA protection. But would that be enough?

Leary reached out to Chris Farrell, Audubon Florida’s Northeast Florida Policy Associate, as well as regional staff from FWC, to urge posting of the largest island right away. The Learys surveyed the island and found that a pair of American Oystercatchers had scoped out the area, but already faced impacts by recreationists. FWC, the Learys, and Audubon staff immediately jumped into action, posting “No Boat Landing” signs in early May, before the summer breeding season for sea and shorebirds really heated up.

With signs in place, the team still had many concerns. Would the island actually remain high enough to protect eggs and chicks during exceptionally high tides or storm surges? Would the signs hold against the wind and tides? Would boaters heed the signs and stay off the island? There was nothing to do but wait and watch.

Birds flocked to the island. Surveyors counted 195 Black Skimmers, 40 Gull-billed Terns, around 100 Least Terns, a pair of American Oystercatchers, and various other seabirds. Despite some erosion and overwash issues, the first chicks hatching in late June prompted celebrations. By July, hopes soared even higher: chicks and fledges of all ages now dotted the island with only a few weeks left until they could safely fly to higher ground and eventually move to other coastal beaches as they prepare for migration. By mid-August, more than a dozen Gull-billed Terns had fledged, in addition to more than 30 Black Skimmers. Even a storm surge caused by a passing Nor’easter didn’t end the nesting season, and chicks fledged throughout August and into September.

Gull-billed Terns and Black Skimmers are sensitive to human disturbance, and their discovery of the new nesting site and ultimately successful breeding season is a huge boon to these vulnerable species. This win would not have been possible without Audubon and our partners’ steadfast advocacy for the redesignated CWA in 2016 with the expanded boundaries, nor would birds have safely raised chicks on the new island without the quick action and continued monitoring by staff and volunteers of the Timucuan Shorebird Partnership.