Hurricane Irma will have lasting ecological impacts on our state's birds, wildlife, and habitat. Help Audubon assess and recover from this record-breaking storm. 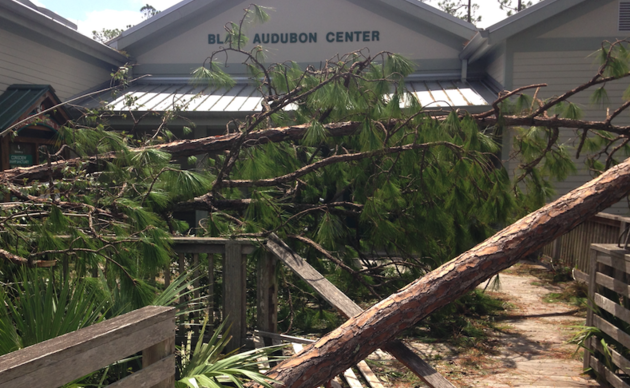 Often seen popping their heads out of the ground, the inquisitive Florida Burrowing Owl was given additional state protections last year due to dwindling numbers and habitat. Just like their name suggests, these small birds of prey nest in burrows in the ground instead of in trees like most owls. With available habitat declining statewide, action by caring people continues to help save this species.

While statewide Burrowing Owl populations have dwindled, smart conservation efforts on Marco Island in Collier County have led to dramatic increases in the population. In the 1990s, there were just a handful of owls, but today more than 230 adults fledged 200 chicks last year on Marco Island. This all happened because volunteers cared. Marco Island’s first environmental staff member, Nancy Richie, started the first island-wide monitoring and management program in 1999. She tracked their productivity, posted nesting burrows, and trained dedicated volunteers to maintain and restore habitat.

After 15 years with the owls, Nancy entrusted leadership of the program to the Naples-based Audubon of the Western Everglades, the largest chapter in southwest Florida. The Owl Watch program is now led by well-known photographer and Audubon volunteer Jean Hall (2015 Audubon Florida Volunteer of the Year) and Karol Tenace. Jean and Karol, along with Audubon of the Western Everglades’ Lori Beall, recruit and train dozens of volunteers each year, who monitor more than 200 owl burrows during nesting season from February to July. Owl Watch maintains nesting habitat; tracks the nests, chicks, and productivity; and enlists law enforcement if needed.

Recently, the Florida Fish and Wildlife Conservation Commission announced plans to update Burrowing Owl protections granted under state law. With citizen science data from the Owl Watch program and expertise from Audubon biologists, Audubon of the Western Everglades and Audubon Florida will be advocating for meaningful protections for this rare species. Stay tuned for more updates on Burrowing Owl protections and email Brad Cornell at bcornell@audubon.org to get involved with Owl Watch in Southwest Florida!