Sign up to receive “The Advocate” legislative briefing and other alerts. 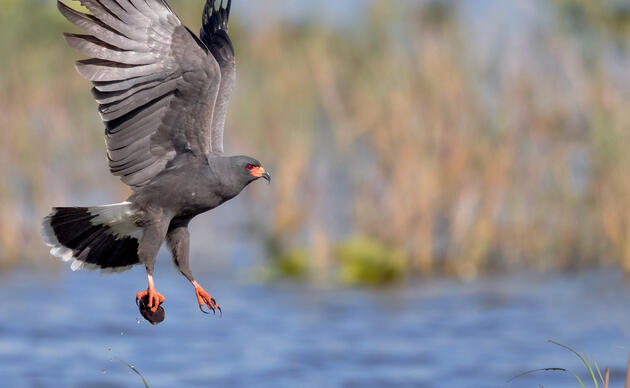 Though the Everglades Science Center (ESC) has been studying Roseate Spoonbills since 1939, new cellular tracking devices are giving Audubon scientists a bird’s-eye view of spoonbill movements across the Everglades.

“Understanding spoonbills’ behavior gives us clues to changes in water quality and quantity in the Everglades,” said Audubon Florida’s Director of Research, Jerry Lorenz, Ph.D. “Spoonbills can also provide warning signals for upcoming changes or shifts to an ecosystem, including rising seas,” he added. Lorenz’s ongoing research has already shown that Roseate Spoonbills are shifting their nesting site locations in direct response to habitat destruction and climate change.

Starting in 2020, ESC scientists captured ten adult spoonbills nesting in Florida Bay and attached cellular tracking devices. Through this effort, ESC staff are already learning that the birds are using more ponds inside bay keys than the mangrove wetlands on the mainland that they historically preferred. Data also show interesting flight patterns, providing clues to where spoonbills are going when not nesting, and when they are moving. This technology will enhance ongoing efforts to understand the effects of climate change, sea-level rise, and Everglades restoration efforts on these charismatic Florida birds.

Historically, nesting season for Roseate Spoonbill in Florida Bay would start in mid- to late-November, when adult birds build nests on keys adjacent to the Everglades in the Florida Bay. For the 2021-22 season, our tracked Roseate Spoonbills started to come back to the bay in mid-November and the video above illustrates the birds looking for suitable nesting and foraging through December. In January and February, most of the tracked birds started nesting. However, the historic pattern of foraging in the Everglades was disrupted, as this year they focused foraging on the keys in the Bay, probably as a result of sea level rise affecting water depths. Because said water levels remained higher than normal, prey fish never concentrated in the numbers Roseate Spoonbills need in order to successfully feed their voracious chicks.

With this data in hand, the Everglades Science Center will embark on a new program to measure hydrological dynamics of Florida Bay, which could lead to vital information about how climate change is affecting this species and their habitat.