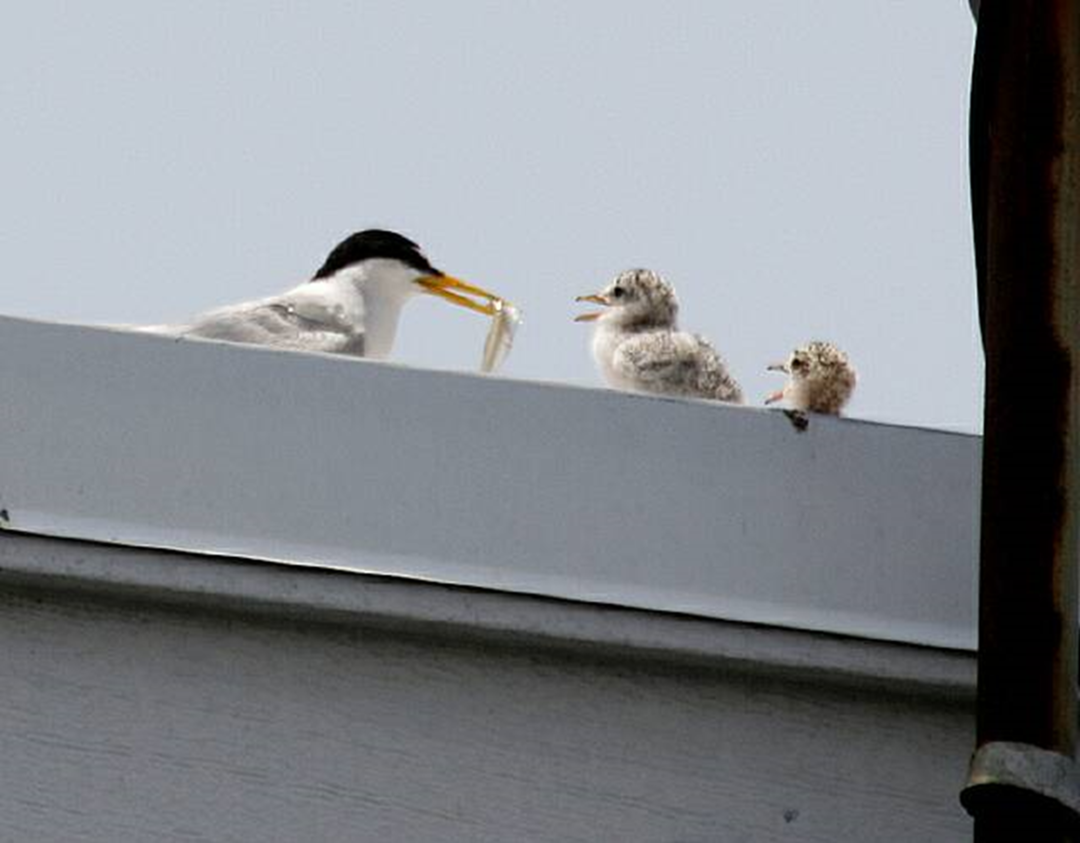 Loss of nesting habitat due to increased beachfront development is just one of the many challenges shorebirds face during nesting season.  With the influx of coastal development comes intensive beach recreation pressure and increased pressure from four-legged predators such as dogs, domestic and feral cats, and raccoons.  In response to these environmental changes, some shorebirds have found alternative nesting habitat on rooftops and active construction sites. Gravel rooftops provide many of the same qualities as beaches: they are flat, open, and have loose gravel in which to build a nest cup and lay their eggs.  But unlike many of Florida’s beaches, rooftops are largely free of human disturbance and four-legged predators, making them an attractive habitat for beach-nesting birds to nest and raise their young.

Shorebirds nest on gravel rooftops across the state of Florida from March through September. These rooftops can be found mainly near the coasts, but also near inland freshwater bodies such as rivers and lakes.  Telltale signs that a rooftop is being utilized for nesting include flying, diving, and calling shorebirds circling above the building and landing on top of it. When birds are raising chicks they will often be seen returning with a shiny fish to deliver to their hungry babies. An often unwelcome sign of an active rooftop is the increase of bird droppings on nearby sidewalks and parking lots.

If you think you have an active rooftop colony of nesting shorebirds please contact the Audubon Florida Rooftop Coordinator in your area immediately by email (contacts below) or contact us at FLConservation@audubon.org.

In Florida, there are six species of shorebirds and seabirds that nest both on coastal beaches and tar-and-gravel rooftops: Least Terns, Black Skimmers, Gull-billed Terns, Roseate Terns, American Oystercatchers, and Killdeer.  Least Terns are the most commonly encountered rooftop nesting species in Florida. The terns and Black Skimmers are colonial nesters, meaning that groups from 6 - 300 birds may nest together on a single rooftop.  All of these species are protected by federal laws under the Migratory Bird Treaty Act.  Additionally, Least Terns, Black Skimmers, Roseate Terns, and American Oystercatchers are listed as Threatened in Florida and subject to additional state protections.

Nesting on rooftops has its advantages, but also comes with a unique set of challenges. The main disadvantage to rooftop nesting is the risk of chicks falling to the ground below.

When chicks fall off a rooftop, they can be injured hitting the ground and can be exposed to feral cats, vehicles, and other dangers.  Audubon Florida staff and volunteers monitor buildings where chicks are falling from unprotected rooftop edges and rain gutters and use a specialized “chick-a-boom” to return them safely to the rooftop. To prevent chicks from falling, Audubon Florida works with property owners to “chick proof” their rooftops during the non-breeding season.  Willing businesses allow a low fencing to be installed around the perimeter of the rooftop to keep chicks from falling into gutters or off the roof.

Another obstacle unique to rooftops is the lack of cover for chicks to escape the heat of the sun and avian predators such as hawks and herons.  Modified pallets can be placed on top of gravel roofs to offer chicks some shade and safety.  If your business is interested in installing chick-friendly features like fencing or chick shelters, please contact the Audubon Florida Rooftop Coordinator in your area.

Although human disturbance on rooftops is greatly reduced compared to beaches, it is also a major concern when rooftop maintenance or A/C repairs are required on buildings with active nesting.  Eggs can be accidentally crushed, chicks startled off the edge of the roof, or whole colonies abandoned due to this type of disturbance. The cooperation of businesses and building owners is essential in the management of rooftop nests. Since nesting shorebirds are both federally and state-protected, a good way for business owners to avoid harassing or harming the colony is to schedule any routine rooftop maintenance during the non-breeding season (October through March). During the breeding season, it is best for building owners and staff to stay off the rooftop to ensure there are no negative impacts on the protected nesting birds.

Interested in getting involved? Audubon Florida has multiple ways volunteers can get involved to help out rooftop nesting birds in the state.

Contact the Audubon Florida Rooftop Coordinator in your area to get involved!

For rooftops in the Florida Panhandle, email flconservation@audubon.org.