Every year Audubon Florida recognizes the state's leading conservationists with a suite of annual awards. This year awards were presented both virtually and as part of a small, local ceremony in Southwest Florida held at Corkscrew Swamp Sanctuary on December 2.

This year’s awardees include:

Guy Bradley - an Audubon Warden in the Everglades - was murdered by wading bird poachers in 1905. His death galvanized the conservation movement, eventually resulting in the passage of the Migratory Bird Treaty Act. Each year, Audubon Florida recognizes an individual for their contributions to bird conservation with an award in Guy Bradley’s honor.

Michael Longo earned this year’s Guy Bradley Award for his tireless protection and monitoring of nesting Least Terns on the roof of his business, Naples Floral Designs. As their historic nesting habitat on dunes and beaches has been developed, state Threatened Least Terns have flocked to gravel rooftops to successfully raise their chicks away from human disturbance. Unfortunately, these islands in the sky pose their own dangers, and enthusiastic chicks following parents flying off to feed frequently end up down gutters and in parking lots below. Least Terns began nesting on the rooftop of Longo’s Naples business in 2020, and since then, Longo has rescued fallen chicks, called local rehabbers when needed, allowed his roof to be “chick-proofed”, assisted the Florida Fish and Wildlife Conservation Commission with their protection of these colonies, alerted staff when workers need to access the rooftop, and so much more. Thank you, Michael, for giving these birds a safe place to nest and breed!

Federal biologist Kim Dryden has been a champion for listed species throughout Southwest Florida through her role at the U.S. Fish and Wildlife Service, especially for Comprehensive Everglades Restoration Plan initiatives. Her work strongly supported the protection of many iconic Everglades species, including Florida panthers, Red-cockaded Woodpeckers, gopher tortoises, Wood Storks, Florida bonneted bats, and American crocodiles. She has likewise been a leader calling for water quality improvements within the Picayune Strand Restoration Project, providing invaluable support for pollution source control.

Kim works closely with the stakeholder community and often represents stakeholder interests in her agency comment letters, biological opinions, and recommendations – demonstrating her commitment to collaboration and mutually agreeable outcomes. She has never shrunk from difficult situations where wildlife protections were at stake, for which she is well known amongst all the restoration agencies. Kim will be retiring soon, and she leaves a legacy of Everglades leadership behind her that has not gone unrecognized. This award acknowledges her long-standing contribution to improve Western Everglades restoration, the national wildlife refuge system, and protection of species and habitat.

President Theodore Roosevelt is credited with the founding of America’s National Park System and making land conservation a core American value. Every year, Audubon Florida recognizes a conservationist who has made significant contributions to conservation in Florida.

A fifth-generation Floridian, Mary Johnson Figg grew up in Fruitland Park, Florida. She had a typical Florida childhood swimming in the nearby lakes, walking barefoot, avoiding sandspurs, and enjoying the citrus from the trees in the yard.

Mary was elected to the Florida House of Representatives in 1982, where she served for 10 years. Her interests in the legislature were vast, stretching across public health, the environment, domestic violence, transportation, and the election system. In 1987, Mary co-authored the landmark Grizzle-Figg Act which set high standards for the treatment of wastewater in Southwest Florida, ending the practice of dumping raw sewage into Florida’s waters. Her efforts were the among first steps forward in cleaning up Tampa Bay, which has since become a comeback story for seagrass, fish communities, and an economy geared towards marine resources and activities. She has remained a tireless advocate for the health and resilience of Florida’s natural environment, and this legislation 45 years later remains a cornerstone of Florida conservation.

Florida’s wealth of natural resources is supported by iconic landscapes and habitats that are essential to Floridians’ quality of life. Each year, Audubon Florida recognizes a conservationist with our Special Places Award for their work to protect the parks, species, and habitat that make our state so special.

Andrew Schumann, Animal Collections Manager at White Oak Conservation, has worked with some of the world’s most endangered animals. He has a strong interest in recovering wild populations of animals through captive rearing and reintroduction programs and has worked with species from Andean Condors to Whooping Cranes. In 2015, when state and federal biologists feared the last remaining wild Florida Grasshopper Sparrows were at risk for extinction, Schumann, Rebecca Garlinger, who Andrew says is the "White Oak sparrow brain,"  and their whole team at White Oak Conservation joined other colleagues and organizations to forge a better future for this rare bird. Andrew and his team pioneered the captive breeding of this dwindling dry prairie songbird, with remarkable success. As a result of his efforts, the 400th captive-reared Florida Grasshopper Sparrow was released on the dry prairies of Central Florida. Thanks to Andrew and the collaboration of the Florida Grasshopper Sparrow Working Group’s members, the bird’s populations are growing, and so too are acres of protected Florida dry prairie habitat without which they cannot survive!

Learn more about the release of the 501st Florida Grasshopper Sparrow.

Volunteers have been at the heart of Audubon since its founding when volunteers banded together to end the slaughter of the Everglades’ wading birds and advocate for sweeping protections for birds that continue today. Each year, Audubon Florida recognizes a Volunteer of the Year for their contributions to Audubon and conservation.

Phyllis Hall earned the Volunteer of the Year Award both for her dedication to birds and the places they need as well as consistently going above and beyond in her service to conservation. She works with Seminole Audubon Society, and she has also been an active and inspiring mentor for the Conservation Leadership Initiative, shaping the next generation of environmental movers and shakers. In addition to her role as a CLI mentor, Hall recently joined our volunteers at the Audubon Center for Birds of Prey. From day one, Hall was eager to help, courteous, and extremely flexible. Hall is always willing to cover the shifts of other volunteers and assist with events and education programs. She currently helps with guest relations, education, and now as an afternoon feeder.

Learn more about or visit the Center for Birds of Prey.

Florida's natural resources are protected by enforcing the laws that are essential to protecting Florida's landscapes and wildlife. Audubon Florida recognizes Florida Fish and Wildlife Conservation Commission Officer Jody Criswell as Law Enforcement Officer of the Year for her hard work to protect the habitats that make our state so special.

Officer Criswell has gone above and beyond to protect shorebirds and seabirds nesting on both the beaches and rooftops, particularly in enforcing protections for the Least Tern colony on a rooftop in Clearwater this breeding season. These nesting seabirds are particularly vulnerable to human disturbance. Criswell has been pro-active in determining protections for the birds and has acted quickly when enforcement of protective regulations was needed.

Audubon Florida would not be able to deliver much-needed conservation results for our state without the generous support of our donors. Each year, we recognize a Philanthropist of the Year, celebrating the spirit of generosity that makes this work possible.

Audubon is pleased to honor Publix Super Markets with our distinguished Philanthropist of the Year award. Publix is supporting the restoration of 500 acres of marsh and prairie wetlands at Corkscrew Swamp Sanctuary with a multi-year commitment of over $1M. This project restores wetland habitats within the Sanctuary so that they better clean nutrient pollution from our groundwater and watershed, reduce the risk of catastrophic wildfires in our community, hold floodwaters during severe weather events, and provide habitat to many wildlife species that call these wetlands home.

Audubon Florida and Publix share a commitment to protecting water and habitat for people and wildlife. Our environment is our economy and we are thrilled to have the leadership of Publix on this important conservation project in the Western Everglades.

Audubon Florida protects birds and the places they need, today and tomorrow. Audubon works throughout the Americas using science, advocacy, education, and on-the-ground conservation. State programs, nature centers, chapters, and partners give Audubon an unparalleled wingspan that reaches millions of people each year to inform, inspire, and unite diverse communities in conservation action. A nonprofit conservation organization since 1900, Audubon believes in a world in which people and wildlife thrive. 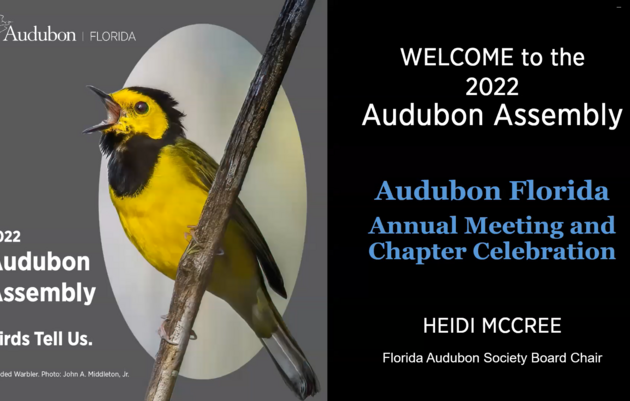 Find recordings from the 2022 Audubon Assembly. 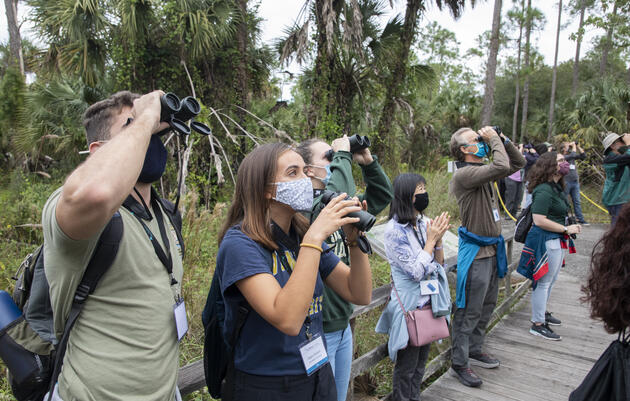 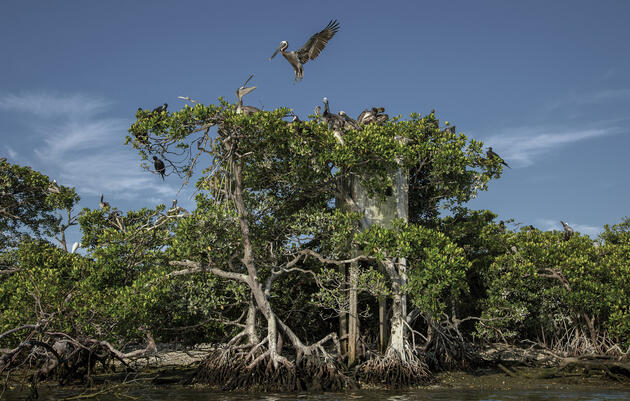