Despite public land managers’ best efforts to manage for the bird, its population declined steeply on the very lands where it should be thriving. Without intervention, the outlook was dire for this diminutive Florida prairie specialist.  But a coalition of agencies, universities, and NGOs stepped up and the future is looking better.

Florida Grasshopper Sparrows are named for one of their calls, a quiet buzz that sounds much like a flying grasshopper. Male sparrows sing only a few months of the year during the nesting season, for a few hours each day. Intricately patterned in brown, white, and black, the birds are well camouflaged within the remote grasslands in Florida’s interior, making them difficult to locate. Their quiet, cryptic, and remote nature has contributed to their anonymous personality.

The Florida Grasshopper Sparrow nests in spring (April-July) on the ground, under palmettos or in grass clumps. The female lays 3-5 eggs, and young fledge within 9 to 10 days. The male sings from a low perch to defend territory—about the only time they are readily visible--and helps raise the young. Diet includes seeds and invertebrates. It is thought that most individuals live their entire lives within a few miles of their birthplace.

The sparrow is so highly endangered as a result of its exclusive dependence upon Florida dry prairie habitat, more than 85% of which has been destroyed. Most prairie loss has resulted from conversion to domestic pasture grasses, which support more cattle per acre and can support many species of prairie wildlife, but not Florida Grasshopper Sparrows. This “improved pasture” lacks the structure that these birds need. Research indicates the sparrows need native prairie in prime condition—it should burn every two years and as a result, have virtually no brush or trees. Burns at the end of the dry season (April-June) are considered better than other times of the year.

Despite our detailed understanding of their habitat requirements, sparrow populations have declined on all three conservation lands where they remain, with 2019 reporting the lowest counts in history. Unfortunately, reasons for the decline are unknown but suspects include suboptimal habitat management, fire ants and other predators destroying nests, diseases, and genetic problems.

The Avon Park Bombing Range sub-population dropped from about 130 singing males in 1999 to only 10 in 2004. In recent years only a few singing males and a handful of successful nests have been detected. In a similar fashion, the counts of singing males at Kissimmee Prairie Preserve State Park declined from 150 a decade ago to only a few found on the entire 50,000-acre property. And at Three Lakes Wildlife Management Area, where as many as 140 singing males were counted in 2008, recent counts have been as low as the mid 30s, and sliding downward.  Another subpopulation has been found on a private ranch and that landowner has graciously allowed researchers to study those birds, but even with them, in 2019, the total population may have been less than 100 birds. At these population levels, genetic problems become a major concern.

The good news is that in 2014, a captive breeding program was initiated from scratch.  No one had ever bred Florida Grasshopper Sparrows before. After many hurdles and lessons learned, by 2019, breeding techniques had become so successful that the Florida Grasshopper Sparrow team released more than 100 sparrows into Three Lakes Wildlife Management Area.  About 50 more were released in the spring of 2020 and to everyone’s joy, not only did many of the released birds survive but they also successfully nested in 2020, adding to the wild population.  See this recent article about that success story.

The Florida Grasshopper Sparrow Working Group is composed of managers of properties the sparrows occupy, researchers, federal and state wildlife agencies, and Audubon. The group’s short-term emphasis: manage the sparrows’ habitat to the best standard possible. The essential longer-term need is to maintain an intensive research effort examining threats like disease, genetics, and fire ants, as well as nest success and population change. This effort is being funded principally by the Florida Fish and Wildlife Conservation Commission. The US Fish & Wildlife Service, FWC, and others are funding several captive breeding efforts, and other partners, including Audubon, are contributing funds and manpower to cooperative efforts.

The breeding program has been expanded to several facilities and we now have confidence that we can raise many sparrows to release.  So many in fact, that decisions on how to repopulate more properties need to be made.  This remains a work in progress and many hurdles lie ahead, but Audubon is very proud and impressed with the dedication and hard work of so many entities and professionals.

Encouraging reports of at least two other subpopulations of Florida Grasshopper Sparrows on private lands give additional hope or the future of this rare Florida endemic. The numbers of birds or population trends on these sites are unknown but the new Everglades Headwaters National Wildlife Refuge and Conservation Area has the opportunity to secure these properties through full-fee acquisition or conservation easements. 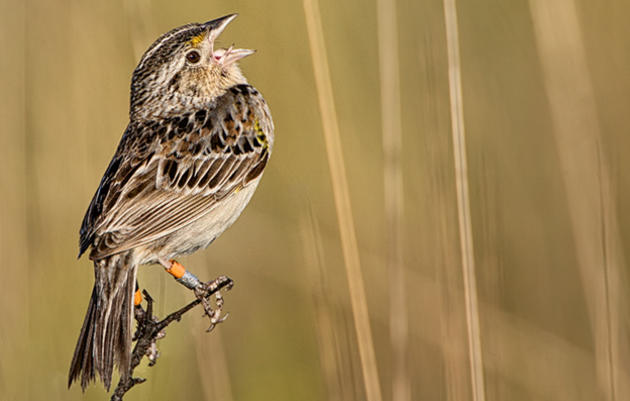 The Florida Grasshopper Sparrow is a federally Endangered bird found nowhere else in the world. 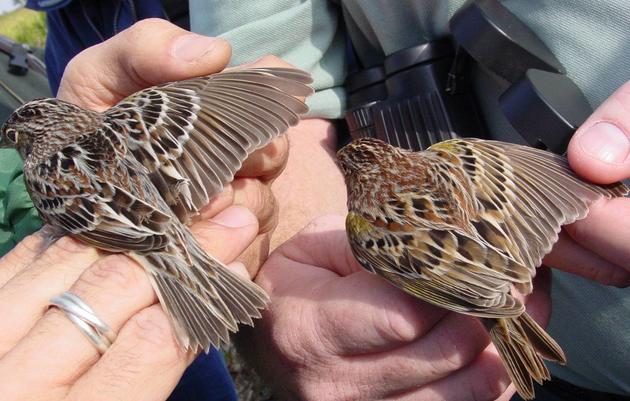 The answer to an oft-asked question. 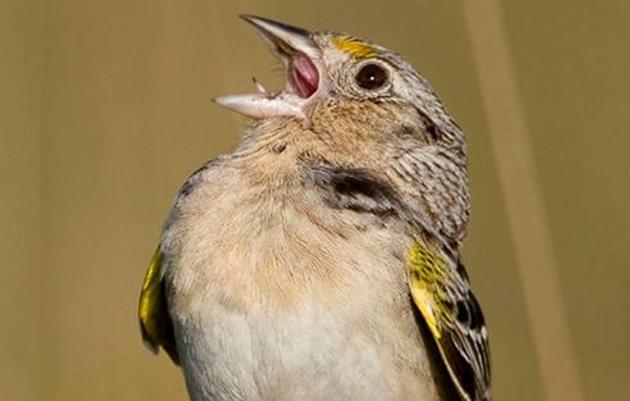 Audubon and our partners are working frantically to find out why and how to stop this decline.